L’hermittes Sign is also known as Lhermitte’s phenomenon or the barber chair phenomenon. Lhermitte’s sign was first described by Marie and Chatelin and named after Jean Lhermitte. This sign is mostly described as an electric shock like condition by some patients with multiple sclerosis. This sensation occurs when the neck is moved in the wrong way or flexed. It can also travel down to the spine, arms, and legs, and sometimes the trunk.

Demyelination and hyperexcitability are the main pathophysiological reasons depicted for the Lhermitte’s sign. Other causes for Lhermitte’s sign include transverse myelitis, behçet’s disease, trauma, etc. Very few studies are available on Lhermitte’s sign and more research needs to be done on the same to ensure its sensitivity and specificity.

First reference to Lhermitte’s in Multiple Sclerosis (MS) was described by Beriel and Devic in 1918. In 1924, Lhermitte described in detail Lhermitte’s Sign in a patient with MS.  Recently, Lhermitte’s sign has been associated with the intensity modulated radiotherapy (IMRT) for head and neck cancer patients. It is one of the late term effects following IMRT in these patients. 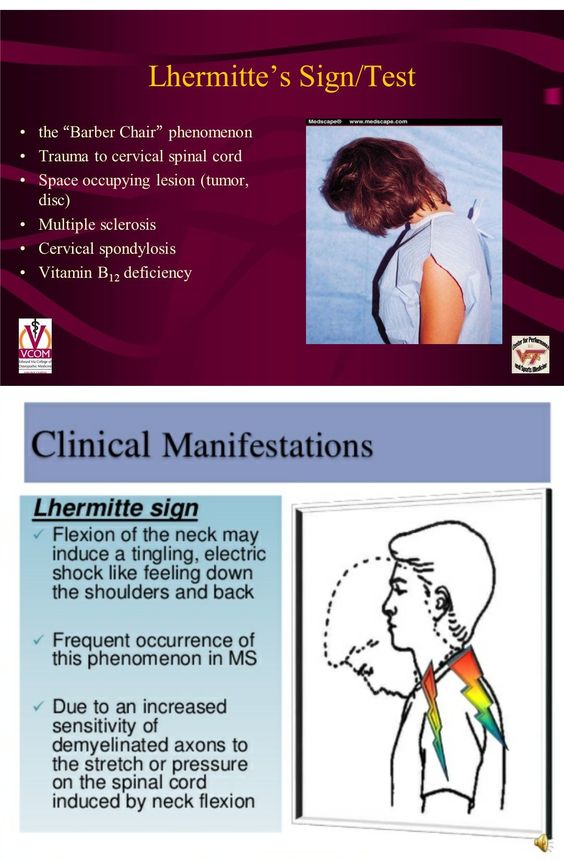 In the original paper by Lhermitte the shock-like sensations were supposed to be caused by medullary lesions due to demyelination or trauma of the dorsal column.  Neck movements are said to exacerbate Lhermitte’s sign. Reverse Lhermitte’s phenomenon is said to be induced by extrinsic compression of the cervical cord and neck collar immobilization.  A relatively rare form called inverse Lhermitte phenomenon can be described by upward moving paresthesia with neck flexion which can be a sign of myelopathy.

** Scooterjon – I first noticed Lhermitte’s phenomenon when I was having exacerbations from my Relapsing Remitting MS.  It’s got to be one of the weirdest sensations I’ve ever felt. If you don’t know what it is or what it feels like Lhermittes could be scary the first times it happens. It feels like you stuck your spinal cord in an electrical outlet! I’d bend my neck down so my chin was on my chest. Then I’d feel an electrical sensation up and down my spine.  It would only last for a couple seconds as I’d immediately straighten my neck out. I used to say and still do, “just one more thing to remind me I’m sick with a strange disease.”